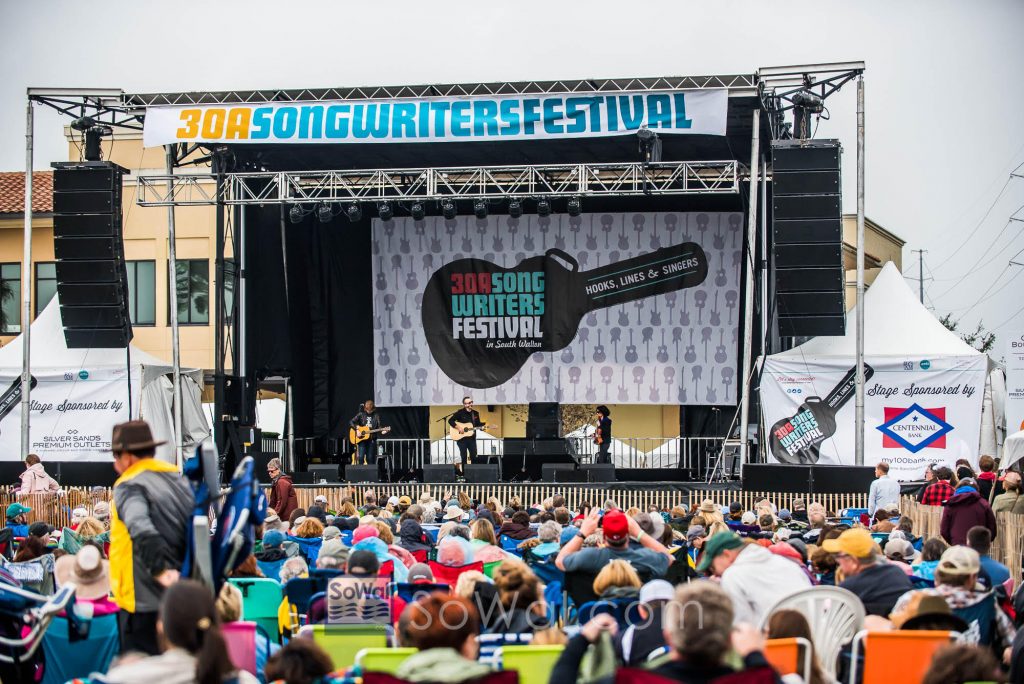 Music lovers, rejoice! The 11th Annual 30A Songwriters Festival line up has been announced, and you’re going to want to start planning your trip to South Walton—pronto.

Every year, songwriters, artists, and musicians from around the world gather together on the shores of Scenic Highway 30A for a weekend of live music, sparkling sunshine, and swaying palm trees. Held from January 17 to January 20, 2020, the festival is just the thing to warm your winter blahs and enliven your spirit.

Dozens of talented artists will be performing at different local venues along the gorgeous South Walton coast. Now is your chance to experience a magical beach vacation of sandy toes, salty skin, and soul-stirring tunes. Start your 2020 off right with a trip to the 30A Songwriters Festival. With venues in nearly every South Walton beach community, no matter where you stay, you’ll be close to great music and a lot of fun! 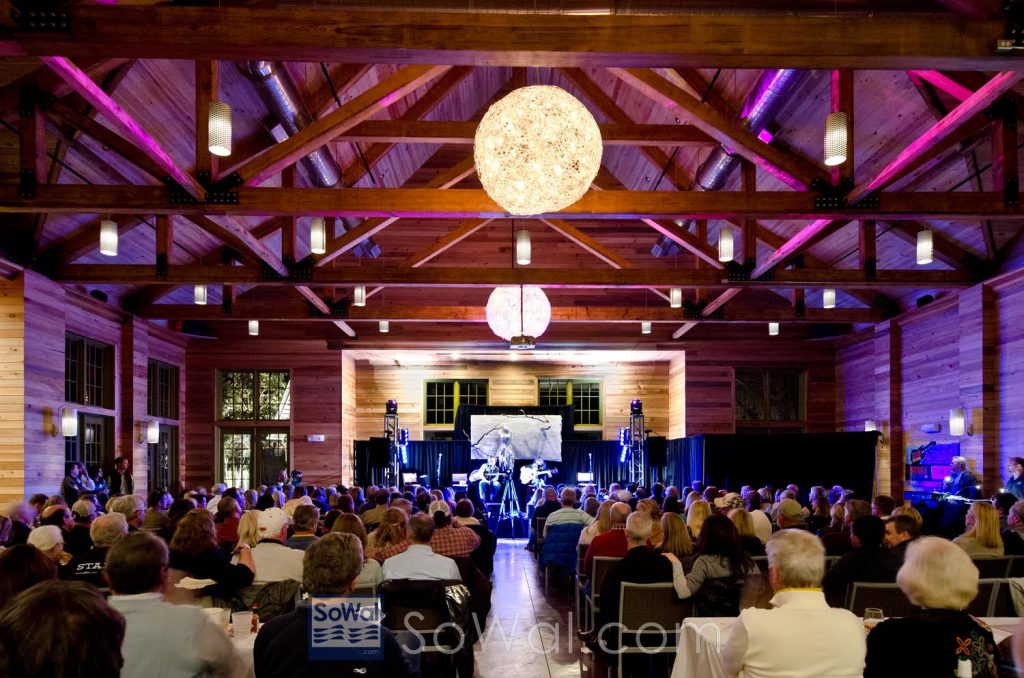 Here are some of the notable artists playing the festival this year.

The former Beach Boy will perform with his amazing 9 piece band. He’ll be singing some of his most famous and beloved tunes, including early Beach Boy hits like “Don’t Worry Baby,” “Fun Fun Fun,” and “I Get Around.” He’ll also cover classics from the legendary album Pet Sounds like  “Wouldn’t It Be Nice,” “God Only Knows,” and “Good Vibrations.”

Enjoy a performance from the quintessential “Beach Boy” himself while vacationing in South Walton—home of the country’s most beautiful beaches. You can’t beat the synchronicity!

The Indigo Girls have recently recorded a new studio album called Look Long. The album is scheduled for release in early 2020. Fans love the Girls for their delicate harmonies, stirring lyrics, and gorgeous guitars. They will debut songs from the brand new album at the 30A Songwriters Festival! They will also be performing their hits like “Closer to Fine” and “Galileo.”

Back by popular demand, John Prine and his band return to the 30A Songwriters Festival this year. Hear new songs from his triple Grammy-nominated album The Tree of Forgiveness. John will perform songs from that incredible album as well as classics like “Angel from Montgomery,” “Sam Stone,” and “Spanish Pipedream.”

The legendary Tanya Tucker will sing songs from her brand new album While I’m Livin’. It’s her first album of new music in over 17 years, and it’s getting rave reviews. She’ll also perform crowd favorites like “Delta Dawn,” “Love Me Like You Used To,” and “Can I See You Tonight.”

On the headline stage Sunday, Don McLean will play hit songs from his decades-spanning career. His song “American Pie” was named one of the top 5 songs of the century by the National Endowment for the Arts! So come join the sing-a-long fun with this amazing artist.

Hailing from Manchester England, Herman’s Hermits and Peter Noone were one of the leaders—right along with the Beatles—of the British Invasion in the 1960s.  Peter Noone’s career includes fifty-two million records sold, eight gold records, historic TV appearances, and a Broadway play. Hear Peter and Herman’s Hermits play oldie-but-goodie staples like “I’m Henry the 8th, I Am,” “Mrs. Brown, You’ve Got a Lovely Daughter,” and “I’m Into Something Good.” 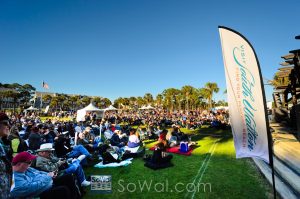 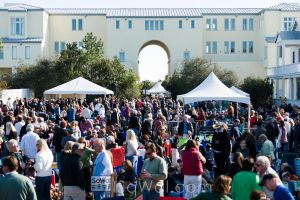 Here are a few local-favorite stops to make on your festival circuit.

Located in Santa Rosa Beach, 723 Whiskey Bravo is a hip eatery with coastal flare and a popular rooftop bar. Dine on mussels in white wine cream sauce, lobster mac n cheese, or seared diver scallops. Sip from the extensive wine and craft beer menu as you relax to the festival tunes.

A Seaside staple and a local favorite, Bud & Alley’s has been serving mouth-watering food to their South Walton neighbors for decades. Their Pizza Bar features double delicious wood-fired pizzas like Jalapeno and Pepperoni, Roasted Fennel Sausage, and Four Cheese. Everything at the Pizza Bar is homemade—including the fresh mozzarella and sourdough pizza crust. Stop by the Pizza Bar during the 30 Songwriters Festival to nibble on a slice, sip on a frozen margarita, and enjoy the talented songwriters. 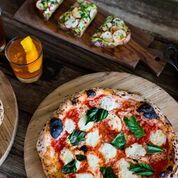 This family-friendly waterfront restaurant run by Chef Jim Shirley serves up mouth-watering gulf coast cuisine. Casual table and bar seating is available on a deck that overlooks the water. Indulge in their signature sushi rolls like The Hot Mess or Bay Roll. With a 12-draft beer system, a fantastic wine selection, and unique craft cocktails, The Bay is the perfect spot to kick back and listen to the world-class live entertainment of the festival.

Located above the beloved Sundog Books in Seaside, Central Square Records is an old-school, independently owned record shop. Wander through the shop for the nostalgic feeling of flipping through vinyl albums and CD racks—remember those? Music lovers of all ages will rejoice in the classic record shop atmosphere. 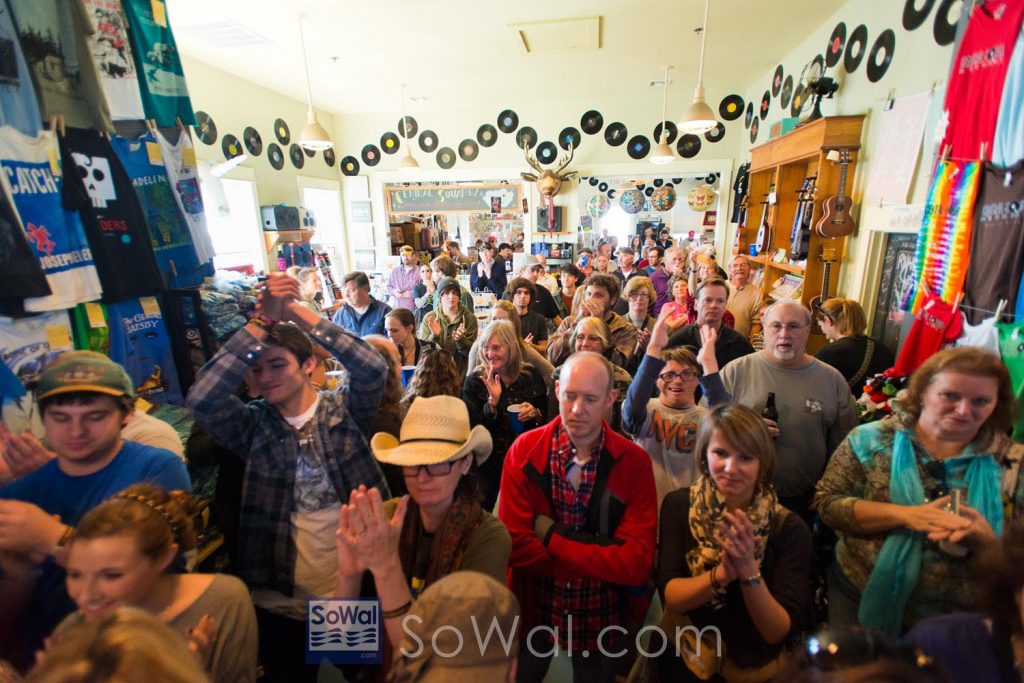 Luxurious vacation homes like 30A Fish Camp and Blue Whale have enough square footage for your whole gang to relax, spread out, and enjoy the festival. Cozy bungalows like Beach Cottage 30A are perfect for smaller groups. And catch a show right outside your door at Gulf Place—home of the Gully Amphitheater and a favorite of our guests who want to enjoy the festival without having to leave their vacation getaway. Contact the 30A experts at Dune Allen Realty today to start planning your trip to the festival.