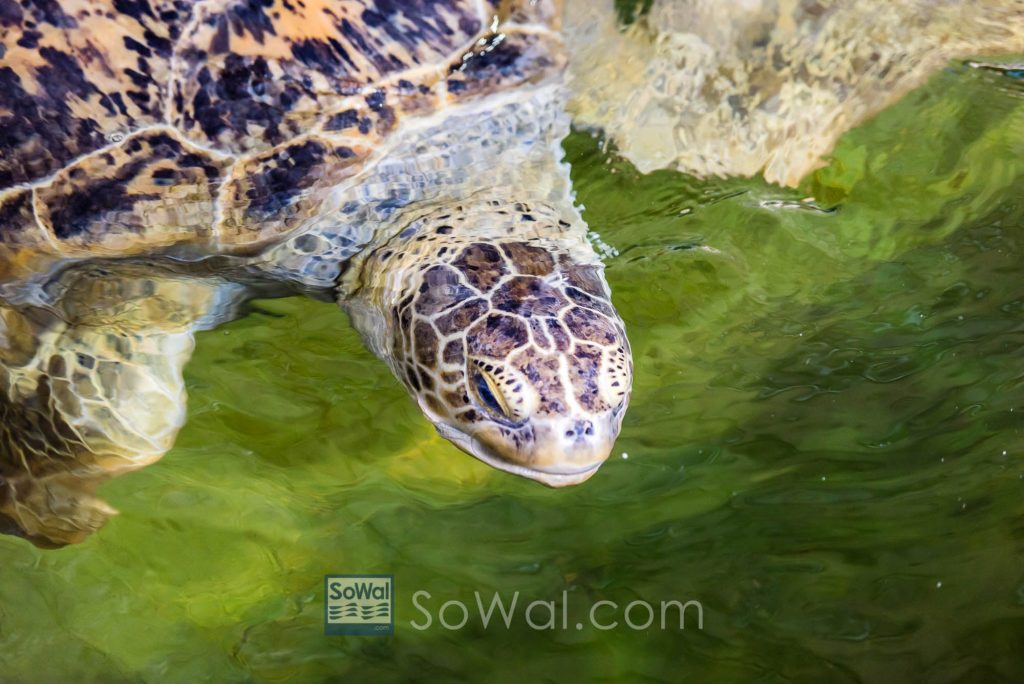 Protective dunes, swaying sea oats, and fine white sand that’s like sugar. Crystal clear water and gentle breezes. These are just a few things that bring visitors from around the world to our beautiful beach communites in South Walton every year. But our picture-perfect beaches are also a draw for the tiniest, most precious of visitors— the baby sea turtle.

Every year, from May until October, hundreds of female loggerheads and green sea turtles make the long trip back to the beach where they were born to lay the next generation of sea turtle eggs in the welcoming and warm sand of South Walton’s shores.

Here are seven amazing facts about these ancient and majestic South Walton locals.

1. A female loggerhead sea turtle can travel hundreds of miles back to the beach where she was born.

Every two or three years, a female sea turtle will return to her hometown beach. She leaves wavy tracks in the sand called “crawls” as she searches for the perfect spot to lay her eggs. The spot needs to be safe and secure since her eggs will incubate for about 2 months.

She digs a hole, lays her eggs, and then covers the hole with sand or mud. After laying her eggs, the mother turtle returns to the sea— her work is done. The hatchlings are left to survive on their own!

2. Newly hatched loggerheads are only about 2 inches long but can grow to be 250 pounds.

On average, a sea turtle will lay about 100 eggs per nest. Each egg is about the size of a ping pong ball. Hatchlings have a temporary tooth called a “carbuncle” specifically designed to break through their shell. Once they “pip”— or break their shell open— they will spend a few days in the nest absorbing their yolk. This will give them a much-needed energy boost to make their trek to the shore.

When they’re strong enough, they squirm up through the layer of sand above them and then onto the beach. Instinct tells them to wait until the sand cools, which indicates nighttime when there’s less of a chance of being caught by a predator. They wriggle their way down towards the reflection of light on the waves— and out into the open sea. The teeny turtles who survive this trek— and their adolescence— will grow to be about 3 feet long and can weigh anywhere from 150 to 375 pounds.

3. Sea turtles use the light from the moon and stars to find their way to the ocean.

Think of it as an ancient GPS. Baby sea turtles hatch with a natural instinct to crawl towards the brightest light. Thousands of years ago, the only option to “find the light” was celestial reflections— from the moon or the stars— on the waves of the Gulf of Mexico.

These days ambient light from street lights, car headlights, and houses can confuse the babies and make them crawl away from the ocean rather than towards it. You can help the baby sea turtles stay on the right path during your South Walton beach vacation by turning off your gulf front balcony and porch lights at night and drawing your blinds, and as well by using flashlights with red film covers if you are enjoying an evening beach stroll anywhere along the Gulf of Mexico during nesting season.

4. The air temperature during incubation determines the sex of the turtles.

Called the “pivotal temperature,” an air temp of 83-85 degrees will result in an even hatching of both male and female turtles. When the air temperature around the nest is over 85 degrees or above on average, then the turtles that hatch will be mostly female. If the temperature during incubation is under 83 degrees, most of the hatchlings will be males.

Many scientists are concerned that with rising global temperatures, more females than male turtles will be born in the coming seasons.

Fully grown loggerheads have only one natural predator— the shark. Raccoons and crabs have been known to eat turtle eggs. And once in the water, the small fledglings are vulnerable to attack by large fish and sea birds. It’s said that only 1 in 1,000 sea turtle eggs will live to adulthood!

While green sea turtles are vegetarians and eat mainly seagrass and algae, loggerhead turtles aren’t as picky. Barnacles, squid, anemones, sponges— it’s all good to the easy-to-please loggerhead. The loggerhead’s jaws are also powerful enough to snack on horseshoe crabs, conch, and clams.

7. In 2019, loggerhead nests are smashing records.

So far in 2019, scientists are reporting record numbers of sea turtle nests in the southeast. Since most breeds of sea turtles are on the endangered list, this is amazing news!

Biologists are attributing these numbers to two important conservation measures that were introduced decades ago. First, state monitoring and protection of the nests began in the 1980s. Soon after, shrimp boats were required to have special escape hatches in their nets— called a Turtle Excluder Device or TED— that allow sea turtles to break free if caught. Hooray!

See it for yourself

Witnessing a nest of sea turtles make their brave journey to the sea is an emotional and unforgettable experience and we are very thankful to our local organizations who work on their behalf. For more information on our South Walton turtle population and what you can do to help, visit South Walton Turtle Watch and Friends of South Walton Sea Turtles. And don’t miss the sea turtle baby shower on August 17th at Topsail Hill Preserve State Park located in South Walton’s beautiful beach community of Dune Allen Beach.

Coming in from out of town during nesting season? Discover our premier vacation rentals in Dune Allen Beach, Florida, near Topsail Hill Preserve State Park. 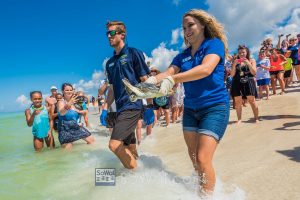 Please note— turtle nests and fledgling turtles are protected by law and may not to be touched or manipulated in any way. Steer clear of the nests, which are usually clearly marked by volunteers with caution tape. Give them plenty of space, and please make sure to keep your porch lights switched off in the evening to help them navigate more easily.