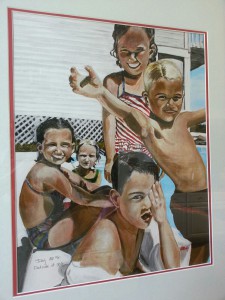 In 1958, there was only one house resting on the south side of Scenic 30a on Dune Allen Beach. Just one. Bo Rentrop (she prefers just ‘Bo’) and her late husband, Billy Rentrop, were there, and Bo remembers that ‘one’ house very well. Louisiana natives, they actually didn’t return to Dune Allen Beach again until 1969; there were more houses on the south side, but not much else had changed. There weren’t many restaurants or establishments yet; everything felt quite untouched. But, there was something special to this place, something that would keep them, and generations more of the Rentrop family returning to Dune Allen Beach every single year for forty-five years straight.

Today, the Rentrop family spans five generations with Bo, the 83-year-old matriarch (referred to lovingly by her family as the Queen Bee), still in charge, still running the show, still with the fiery and charming personality you would expect from a lady who would make it a priority to provide her family with a beach vacation each and every year.  It takes a bit of planning – the Rentrops are scattered all around the US, some in California, some in Kansas, others in Texas, Georgia, and the Carolinas. 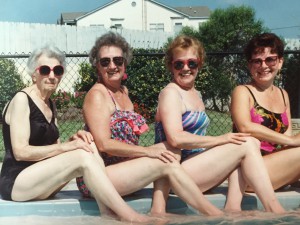 Every summer, without fail, children and parents, grandparents and great grandparents, and of course the matriarch with the shining personality come flying or driving in to spend yet another summer vacation together as one big family. And, I do mean big; in fact, I can’t quite stress it enough. This last summer, the Rentrop crew was made up of 62 people, for one week turning a small stretch of Dune Allen Beach into their own private paradise for a family reunion under the shining Emerald Coast sun. This year, more than ever, it was apparent what sort of legacy Bo had created for her family: the only time of the year that every Rentrop is in the same place at the same time, enjoying together the tranquility of Dune Allen Beach.

My interview took place over the phone with five of the Rentrops. Keeping straight who was speaking was practically impossible, but the enthusiasm to talk about their family’s memories on the beach was obvious, and so too was their respect for the one who made it all possible.

If only life was nothing but a summer vacation all would be well and good, but over the course of forty-five summer vacations, were also forty-five years of real life. Children grew into teenagers and adults, those moments of blissful innocence building sandcastles on the beach turned into complex lives marked by adult responsibilities and the ups and downs that real life brings.  As the contoured streams connecting the dune lakes to the gulf took on new shapes and new forms, so did the Rentrops’ lives… “There were the beautiful summers with loved ones who are no longer with us and may best be remembered through memories of times once shared together.”

The mosaic of family memories and Dune Allen summers would be full of beauty, dotted by sadness, and rich with change.  One summer would also be challenging. In 2005, during the aftermath of hurricane Dennis, the Rentrops held what was to be a beautiful wedding on the beach. As it happened, their rentals at the Dunes condominium had been badly damaged, and the family instead ended up in a single beach house.  Full of energy, and certainly doused with disappointment that the weather had put more than a kink in their beach wedding plans, a family meeting was held to install order into the cramped space (siblings, spouses, children, and Bo).  The adults voted Bo in charge. “It was the summer of the Ten Commandments,” they fondly recalled, “honor thy mother and father!”  They did just that.  In the end, the wedding was held in a condo, the beach too damaged to host the ceremony.  But the ceremony was beautiful nonetheless because the Rentrops were together, and besides, that’s the way Bo wanted it.This last summer, the Rentrops told me, presented the best vacation they had ever had: the sun shined the entire time, they watched the 4th of July fireworks in the sand, and it seemed as if the beach had been restored somehow over the years, the natural processes of the waves and weather rebuilding the shore. It was as if “God had given us the beach back.”

On the phone, Mickey Rentrop Shannon told me that the fifth generation of the Rentrop family doesn’t quite yet understand the significance of this family tradition. To them, it’s just the beach. But to Mickey, to John, to Amy, to Ruth and Liz and Nicole, there is recognition of the sacrifices it once took for Bo and Billy to make their summers on Dune Allen Beach a reality every single year. There is recognition of the gift that has been given to all of them, this legacy of vacations on the beach. They may spend only a week here each year, but they revisit it often in their minds, a precious place of calm and happiness. They remember the bonfires and the long walks searching for driftwood… to the Rentrops it feels like heaven, a place where what really matters counts; a week of nothing but family and the cheerful days of summer in a place that they love. 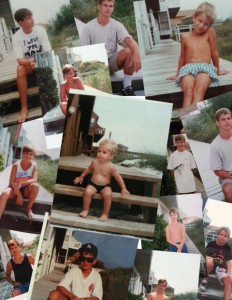 More about the community of Dune Allen Beach today

2 thoughts on “A Legacy on Dune Allen Beach”